My students started Computer Science for All in Algebra.  They use Code Studio Bootstrap (studio.code.org/s/algebra) program to write codes to generate equations.  Through this program, my students are able to connect their mathematical understanding of order of operation and functions that they learn in Algebra to coding. Prior to starting this ImagineIT Project, my students expressed an interest in video games, but did not realize how much work, people, time, and money it takes to create a video game that they play.  It was surprising to me that my students did not have any background knowledge around Computer Science prior to our discussion of the unit.  They guessed that it might be jobs related to computer hardware, such as the desktop and keyboards.  I thought they had some understanding since they had some exposure through computer teacher in earlier grades.
For this project, I grouped my students in pairs – same gender, one higher performing student with lower achieving student, though keeping their gap close.  They created one account and shared one Chromebook per partner to “force” them to work together.  I make sure my students rotate computer usage time so that they’re both exposed to the computer science work.
In the first 3 stages (or chapters), my students have learned that math is not just a way to calculate numbers but a way to communicate ideas, and that math is a language.  They learned that coordinate planes are used for locations of the images, and vocabulary words of evaluation block, evaluate, expression, function, and value – all of which are used generally in math, (except evaluation block).  Finally, they linked the idea of order of operation in math: PEMDAS and working from left to right to the order of operation in writing codes: working from inside evaluation blocks to the ones on outside. 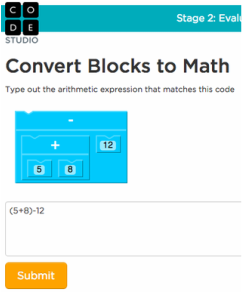 My students have converted a line of mathematical problem with different operations to writing codes to run the code and solve the mathematical expression. Then they moved onto using evaluation blocks to create images of figures that are directed to make in the lesson.  After much practice, my students have used their creativity to create the following image on their own.